Ron Moore recently wrote a very interesting response to a question about Star Trek on film versus television. He made a very good point, something that I’ve felt was wrong with the “reboot” series... that a Hollywood blockbuster film can never tell the same kinds of stories as a television show.

The features are very big action-adventure movies, lots of spectacle, run and jump, shoot-em-up and blowing things up. The fate of the Earth, or the universe itself, is always at stake. It’s always about the captain, and one other character has a strong B-story, and everyone else sort of has very small roles beyond that. But Star Trek, as originally conceived, and as you saw play out in all the other series, was really a morality play every week, and it was about an ensemble of players. They were exploring science fiction ideas, sociological ideas and moral ideas.

That’s a very big part of it. People who go to the theater are a very different kind of audience; they want action, excitement, sex. They don’t want to see the captain living 50 years of another man’s life, or a man trying to find his place in a world he no longer recognizes if he’s been “asleep” for 75 years. People want to see the fate of the universe at stake, they want to see exciting or affirming stories where they don’t have to question anything, or even think very much.

But I think the problem goes deeper than that. Star Trek’s spirit can be summarized by a sentence that has almost passed into cliché, such that it gets ignored despite its meaning: “...to explore strange, new worlds, to seek out new life and new civilizations, to boldly go where no one has gone before.”

I don’t think we’re going to see that in Star Trek Into Darkness. But then, we didn't see a lot of that in many of the other movies, either.

The essence of Star Trek can be boiled down to one single word: optimism. Most of the first ten movies were infused with it. Even—no, especially—the most popular, action-packed films. First Contact was a life-and-death struggle against the Borg, but it was also about witnessing the promising beginning of everything good in the Star Trek universe we know and love. The Undiscovered Country was about coming to terms with the possibility of peace with a previously implacable foe, summed up with a simple statement, “People can be very frightened of change.” And The Wrath of Khan...where should I start? The very threat of armageddon was from a device that could create life, not just from a simple destructive weapon. Kirk rediscovered his calling, and (re)discovered his family. And finally, Spock’s sacrifice was one of the most meaningful deaths in science fiction, in a bittersweet but uplifting way.

There was none of that in 2009’s Star Trek. Just an angry man out to blow shit up. We didn't see Kirk and Spock become friends, they just developed mutual respect through adversity. (Sure, I know true friendship takes time to develop.) The entire conclusion was treated as a fait accompli, because we knew that Kirk should be the captain, and so what if he’s only one day out of Starfleet Academy and hasn’t proved himself to be a capable commander yet? (No, leading one fight doesn’t count. That just means he’s a good tactician, not a good leader.)

I want to hold out hope. There are glimmers of future greatness: I love the cast, the effects are awesome, the story itself looks exciting. I know that a trailer can’t give away the whole story; it’s designed to get people excited to watch it. But I’m afraid that I will sum up Into Darkness in the same way that I sum up the last movie: It’s a great movie, but it’s not a great Star Trek movie.

Well, we’ll see in about three weeks. In the meantime... Optimism, captain! 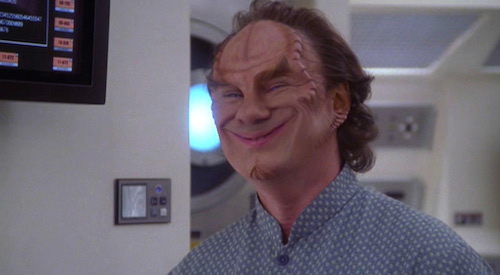